Terrence Andrew Davis (December 15, 1969 to August 11, 2018) was an American programmer who created and designed the operating system TempleOS. Its development was a complex and unusual undertaking for one person. Davis also posted video blogs to social media, and by the time of his death, had established a small online following. He often referred to himself as "the smartest programmer that's ever lived".
As a teenager, Davis learned assembly language on a Commodore 64. He earned a master's degree in electrical engineering from Arizona State University and worked for several years at Ticketmaster as a programmer for VAX machines. In 1996, he began experiencing regular manic episodes, one of which led him to hospitalization. Initially diagnosed with bipolar disorder, he was later declared schizophrenic. He collected disability payments and resided in Las Vegas with his parents until the year before his death.
All info has been gathered from wikipedia as well as the official templeOS website, however I do not know how to properly site sources. 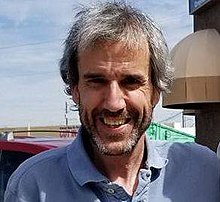